The main characteristics of climate change are the changes in mean climate parameters and the increase in the frequency of climatic extreme indices (WMO, 1998). Climatic extreme indices are phenomena that are scarce in terms of frequency and intensity, which disturb the equilibrium of climate systems. A joint project was undertaken within the World Meteorological Organization's activities between the CCL, CLIVAR and WCRP and provided specific relationships to calculate various indices resulting in the production of many softwares such as Climdex and Climdex (Zhang, 2007). Halimato et al. (2017) investigated the trends of temperature and precipitation changes in the Segou and Bamako in Mali. The results in Segou showed that the number of cold days and cold nights significantly reduced and the number of hot days and hot nights increased.

One of the common characteristics of environmental factors is their continuous spatial variations. Therefore, in order to quantitatively describe the distribution patterns of environmental variables, the geographical location of the observations must be taken into account at the same time, in addition to the value specified (Buma, 1996). Thereupon, in this study mid-term data of 2017-2050 were simulated in order to investigate the influence of climate change on the trend of temperature extreme indices by means of MIROC5 climate model and Delta microscale method based on the fifth IPCC report using daily temperature data in the statistical period of 1992-2016 at 17 stations in South Khorasan Province. Afterward, 16 temperature extreme indices, which were defined by ETCCDMI expert group, were calculated using RClimdex software in R programming language environment. The non-parametric Mann-Kendall test and linear regression were applied to trend analysis process, the trend of all indices were calculated at probability levels of 0.8, 0.96, and 0.995, and finally by using the conventional Kriging geostatistical method, zoning maps were drawn.

South Khorasan Province in Iran has an area of 151,193 km2 and is located between the latitude of 30° 31' to 34° 53' N, and the longitude of 57° 03' to 60° 60' E. In this study, daily temperature data of seventeen South Khorasan meteorological stations were used during the period of 1992-1996 with different climatic conditions. The first data were controlled by RClimdex software and then the 16 temperature extreme indices defined by the ETCCDMI Expert Group were calculated using RClimdex software in the programming language environment of R on annual and monthly bases. The Mann-Kendall test and Statistical method of linear regression were utilized to examine the trends of indices. Afterwards, the probability of occurrence was calculated at 0.8, 0.96, and 0.995 probability levels to be respectively equal to 5, 25, and 200 year return period after fitting to the theoretical distributions using SMADA software, sequentially, the likelihood maps of probability were plotted. From the existing climate models, the Miroc5 model was selected and the results of previous CMIP5 data show acceptable performance of this model for simulating atmosphere, ocean, glaciers, chemistry and aerosols of the Earth and atmosphere, giving acceptable results for arid and desert areas (Dasht Bozorgi, 2015 and Ullah, 2018). In addition, from the four scenarios introduced by AR5, two scenarios namely RCP4.5 and RCP8.5 were selected for the period of 2006-2050.

Examination of temperature indices, including cold (TX10P, TN10P) and hot (TX90P and TN90P) period indices in different scenarios, shows that cold indices tend to decrease and hot indices tend to increase in most parts of the province. The number of cold nights is decreasing based on the RCP4.5 and RCP8.5 scenarios in the north and northeast of the province, indicating that the future needs of trees in these areas will not be met. Based on the RCP8.5 scenario, the TN90P index at all stations has an increasing trend, which has a significant negative impact on summer crops and horticulture crops in the province (Bokwa et al. 2014). The duration of the CSDI cold index has declined throughout the province and the number of frost days is also declining in the two RCP4.5 and RCP8.5 scenarios for the next 50 years. On the other hand, some hot indices such as the TR20 index are spread in the north and northwest of the province. The SU25 extends from west and northwest to the center and south of the province. Future scenarios show the likelihood of an increase in hot extreme indices in addition to the west of the province to the south and center and the likelihood of danger of cold extreme indices extending from north to northeast of the province. 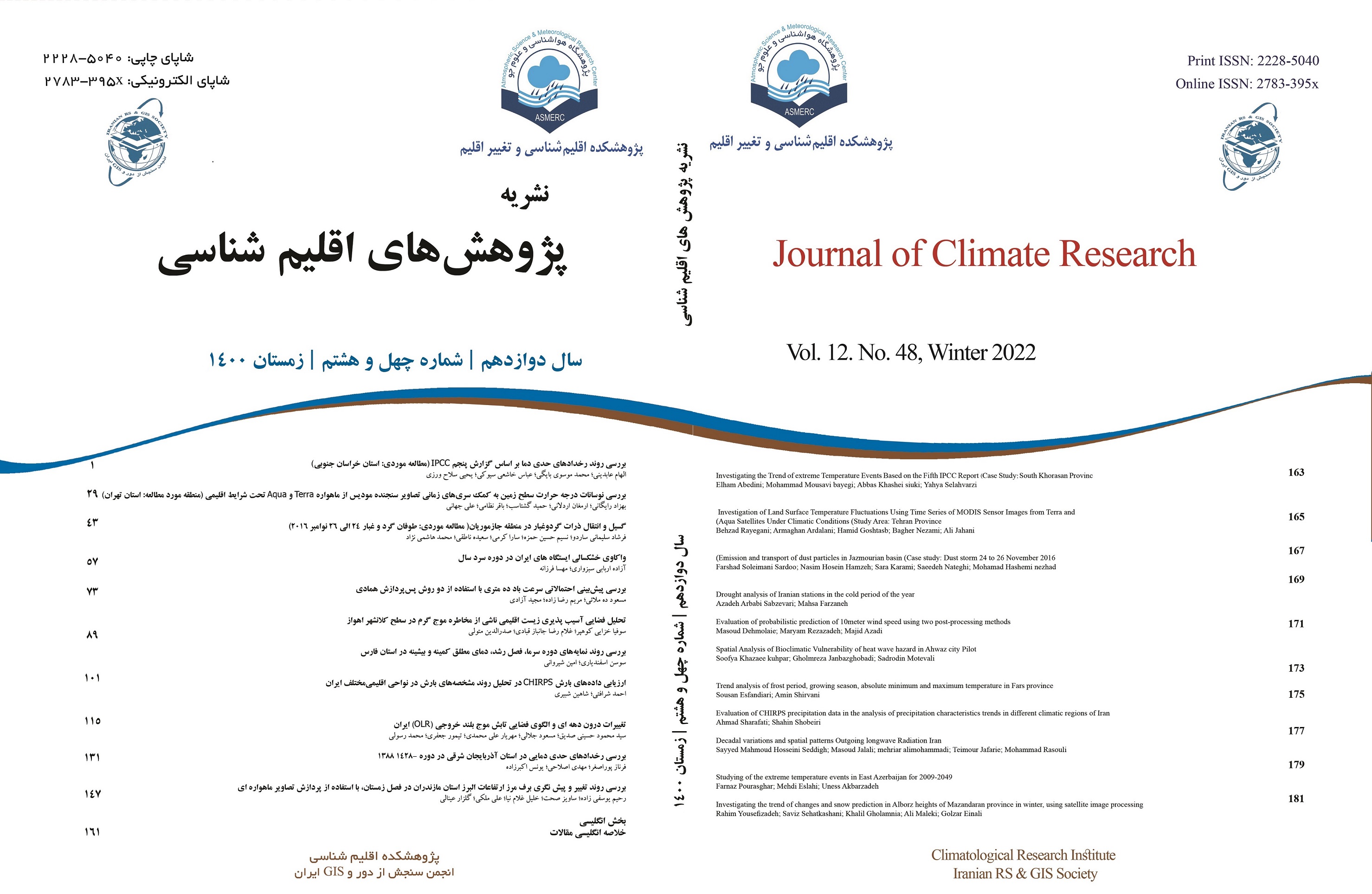