It's been a while that, global warming has been involving the scientific and political circles of the world. Human worries about the effects of climate change have put countries on the agenda of international treaties, including reducing carbon emissions and so on. Since the implementation of commitments in countries requires public participation alongside the actions of governments, the present study has examined the sociological analysis of the relationship between climate change and social capital from the perspective of relevant experts. According to O Niell & Hulme (2009), today individual commitment to the detrimental effects of climate change can provide the impetus for the necessary changes in behavior to provide the required weight to adopt coping policies. But in many cases the detrimental effects of climate change are of little importance to citizens, one of the reasons being the imminent concealment of a spatial threat. The main purpose of this study is to answer the question: What is the relationship between climate change and social capital? The research method used in this study was qualitative and thematic analysis. Semi-structured interviews were conducted with 15 professors and experts in sociology, geography and agriculture and water resources. The four main themes of the interviews were extracted from the necessity of cognition, awareness, social trust, social participation, and legitimacy, all of which are key components of social capital. According to interviews with professors and experts, it is clear that the need to be aware of the most important factors in dealing with crises such as climate change is what helps us to achieve this. There is awareness that needs to be addressed through professionals and practitioners, and then there is the discussion of education that should be institutionalized through childhood and through school education and that NGOs can play an effective role in this regard. Another role that can be effective in awareness is the role of the media, especially cyberspace, which can be influenced by the widespread use of it. Another important factor mentioned in the interviews is the lack of social trust in our society. Many of the experts interviewed believed that the reason for such a weakness was due to the way officials handled it because it failed to give people confidence not only in crises such as climate change but also in more trivial matters such as water projects. And the fair distribution of water and so on in society. In addition to their own responsibilities, people and NGOs can be effective in building that trust. This group can increase resilience by thinking about social benefits and training social skills and increasing them in response to natural crises and resource depletion. A third factor that contributes to events such as climate change is the social participation of individuals, which many experts believe is a necessary part of their trust and that officials and public officials are involved in making decisions about local communities. In other words, the role of the authorities in planning to attract people is considered important. On the other hand, the participation of the people and the NGOs in crises such as floods and other issues such as the earthquake war, which is more visible to the public, is clearly evident. In general, involving people in decision-making increases people's sense of responsibility. The fourth topic of the investigation was legalization; which experts say requires compliance by law officials themselves. Gaining people's trust is somehow the result of law enforcement by the upper echelons of society, and the proper conduct of law enforcement and lawmakers leads to law enforcement by the people. In fact, these themes are intertwined and interconnected. These four themes can be linked: informing individuals and cultures about the effects and consequences of climate change phenomena in a long-term way by institutions such as education, the formal media and non-media. Officially, NGOs and professionals with the two target populations of the public and the authorities, will increase the sense of responsibility among the public and authorities. By doing responsible actions, the law will be respected and law enforcement will take its place. It is in this state that social trust and its effects can be seen to increase the participation of people in society. As a result, climate change is a potential threat to water, food, health, and social capital., Is achieved through planning and upgrading the level of knowledge and awareness of individuals, increasing social participation and promoting social capital. 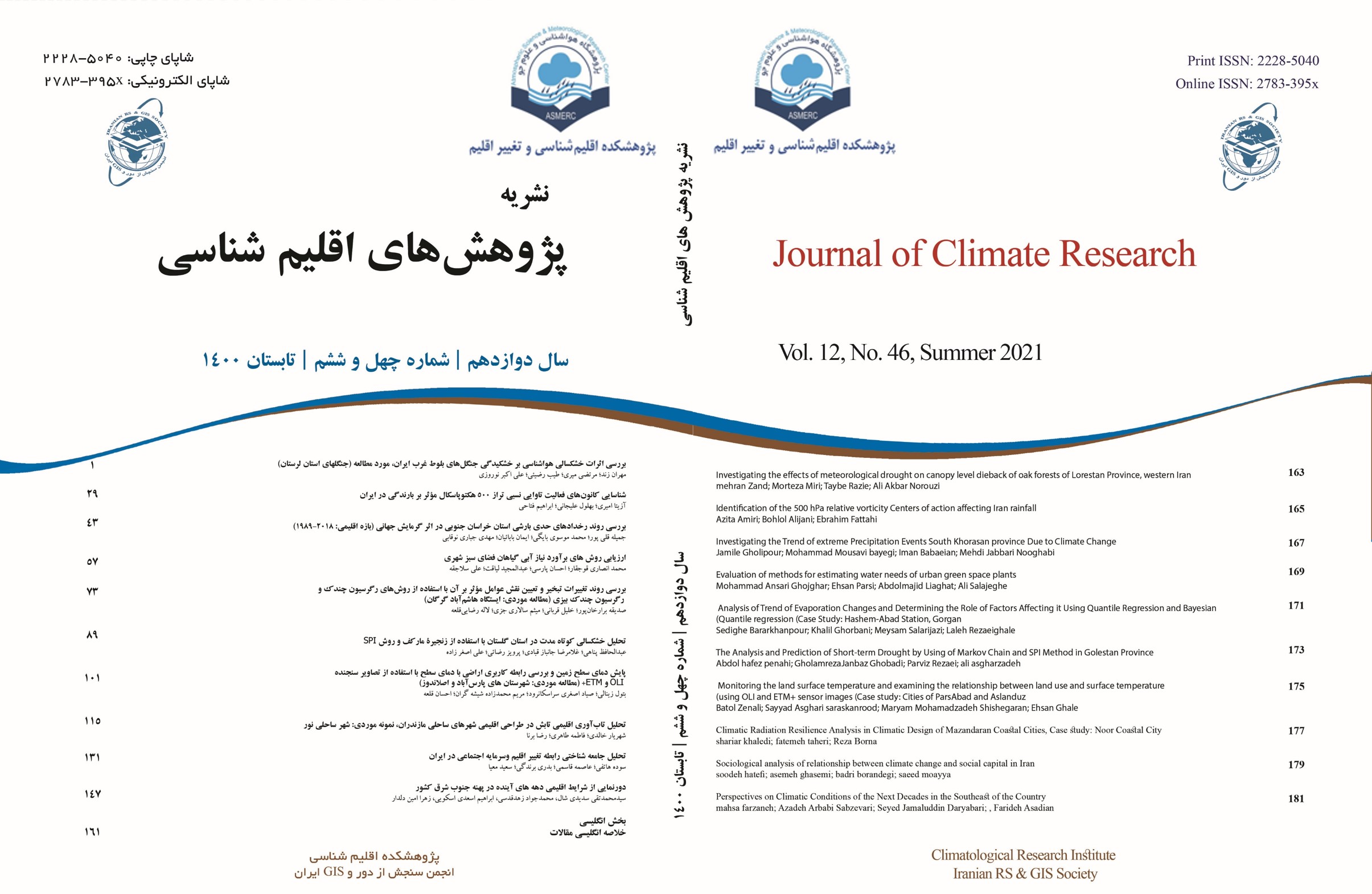