The study of climate change effects on crop growth and irrigation water requirement is crucial in maintaining food security. As a direct consequence of warmer temperatures, the hydrologic cycle will undergo significant impact with accompanying changes in the rates of precipitation and evaporation. Water scarcity and climate change pose a big threat for Iran’s food security. Climate change is projected to increase temperatures, spatio-temporal variability in rainfall pattern, and water stresses to crops. Due to the significant role of water in crop yield, inadequate soil water in crop producing regions can result in substantial yield drops. Agriculture, which accounts for 80 percent of freshwater consumption worldwide and the researchers, examined trade through the lens of what they call “virtual water” — a measure of how much water goes into the production of a bushel or a kilogram of a given crop. Upon release of new scenarios based on Radiative Forcing which are known as Representative Concentration Pathway scenarios (RCP scenarios), by Intergovernmental panel on climate change (IPCC) in fifth assessment report (AR5), a new set of 42 global climate models (GCMs) have been proposed for future climate projections
The current study was aimed to investigate the possible impacts of climate change effects on evapotranspiration and virtual water of several major crops of Wheat, barley, potato and tomato in there region in Kerman province, south of Iran.

Results and Discussion
The results of study showed that the air temperature, in all month in study stations, would increase comparing to baseline period 1990-2017, such that in three study stations under RCP 8.5 scenario the air temperature will increase 0.66,0.77,0.68 ◦C, respectively. Similarly under RCP 4.5 scenario, the corresponding values are 0.42, 027, 0.45 ◦C. The Maize crop yield would decrease in all three stations (with highest decrease in Jiroft station with 52 and 56 percents under RCP 4.5 and RCP 8.5  in 2018-2039 period comparing to baseline period, respectively.) The virtual water of all selected crops is projected to increase, but this increase would be higher for wheat and barley crops. The lowest increase in virtual water was observed in tomato crop during the future period of 2018-2100.In Bam station, the highest amount of virtual water belongs to barley crop during the period of 2040-2069, i.e. 4853 and 5153 cubic meter per ton under two RCP scenarios, respectively. In Jiroft wheat crop has the highest virtual water during the period 2040-2069 projected to be 4984 m3/ton. In case of Kerman station, largest amount of virtual amount under RCP4.5 belongs to wheat during the period 2040-2069 and under RCP 8.5 corresponds to barley with amount of 4256 m3/ton.
Conclusion
The virtual water of all selected crops is projected to increase; this increase would be more for Barley and Wheat. According to results it is recommended to estimate the virtual water of currently cultivated crops in the region for coming years. Continuous cropping of wheat and barley is not advisable Alternative low-water-use crops may be an option for producers. Further studies on major crops’ virtual water in the agricultural regions of the country are recom 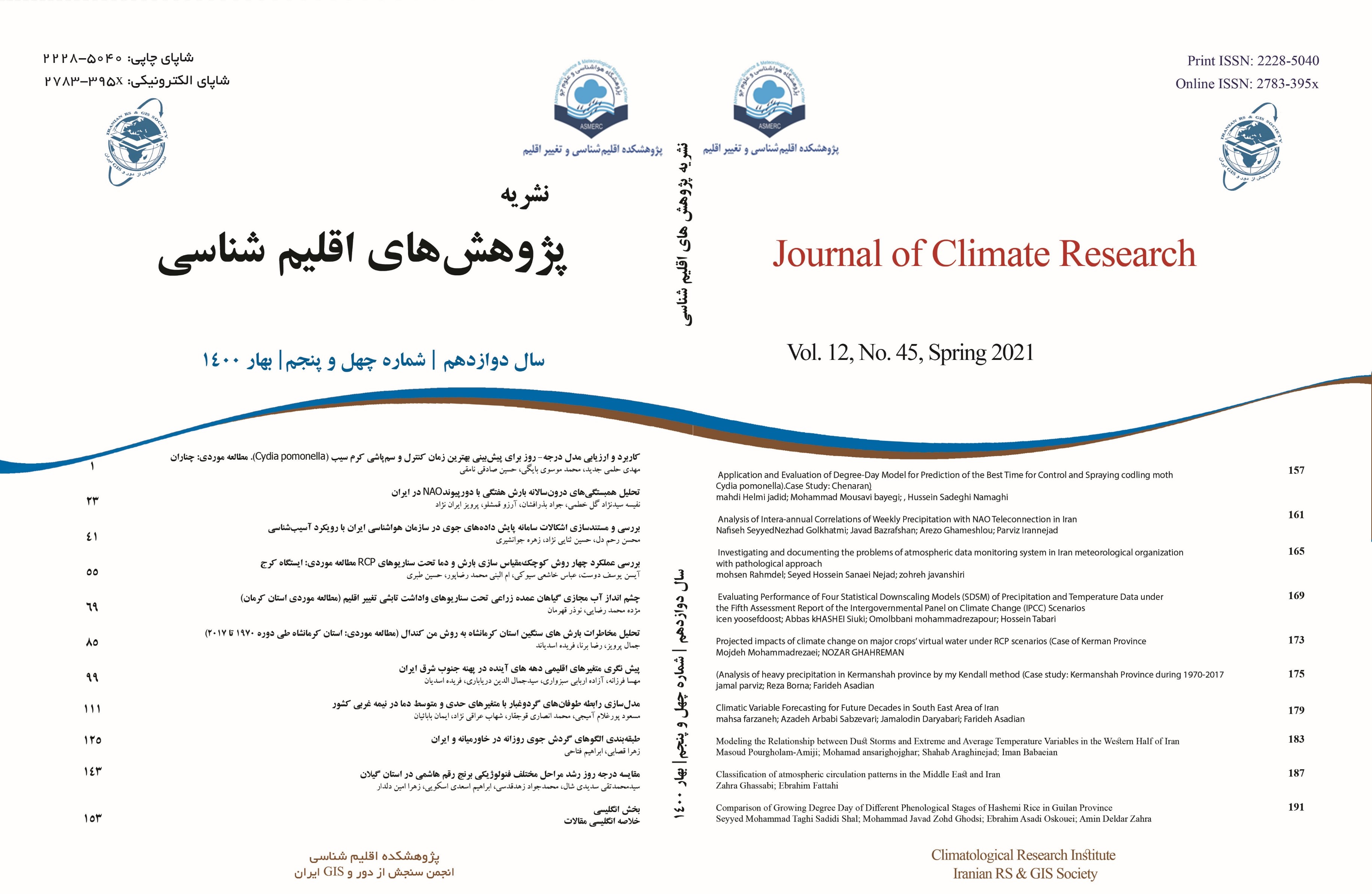